This is for you,

john75half!! Everyone loves octopi! Except for those people who buy cheap blackmarket shoes from them.

It's no secret to my friends, family members and even random strangers that I have slash goggles on like 24/7. Everything I see can be slashed, up to and including randomly real people.

On a (semi) related note, I have deep, fangirly love for Abraham Lincoln.

I'll admit, that Lincoln gets a lot of press as one of the best presidents like ever totally whoa, or at least that's what we've been taught since tiny elementary school children somehow combine President's Day with Black History Month and come out with Lincoln = awesomeness. I do not disagree with this.

What other people do not have, I'm sure, is the complete fangirlieness of my love for Lincoln. If we ignore the incredible hottness of his intelligence and speechifying, he is a man who is teeming with angst in the richest of forms. A lawyer from a poor background works honestly and diligently even while his life is filled with failure. His wife is crazy. His job is hard. His babies die. He has power, but it's embroiled in war where half of the country wants to kill you, and the other half really isn't so fond of you getting their boys killed. He's too tall, too skinny, with big ears and nose, and gets these depressing moods all the time. Rife with fandomly attributes!

If I were so inclined I could write a Mary-Sue historical RP fanfic where a sympathetic young housemaid in the White House comes across Mr. Lincoln and soothes his deeply wrinkled brow, allowing him to continue on with the horrors of civil war for just one more day.

...if I thought any teenager who was interested in Mary-Sue fanfic would also be interested in Lincoln, I might write such an atrocity. Much more interesting than soothing Johnny Depp's sea-salt roughened face and hair filled with lice, fleas, and probably, syphilis.

Part of this fanfic, as I explained to a friend yesterday, would involve convincing Mr. Lincoln to grow a beard. We know that a chick did convince him to grow a beard right before he took office:

"It's cannon!" I proclaimed. "And by cannon, I mean history!"

So I am clearly not the only one who loves Mr. 5-Dollar-Bill maybe a little bit too much. I just finished reading "Assassination Vacation" by Sarah Vowell, and nearly half the book is dedicated to our first assassinated pres, Mr. Lincoln. But Ms. Vowell also introduced me to another ahngst-ridden character of the same period, Edwin Booth.

If you get a chance, you should probably read this book. It's got all sorts of interesting bits of info and it's written in a way that's not too dry (except for a large part of the bit about McKinley, whom Vowell clearly does not fancy in the way she fancies his successor, Teddy Roosevelt) but we see clearly the fangirly love for Edwin, and I get it. Despite the name.

Edwin spent much of his formative years caring for his drunken actor father, and eventually became one of the more famous actors of his time, even tho he wasn't as hawt as his li'l brother was. But his history reads very much like Lincoln's: started a theater, went bankrupt. Married = she died. Married again = she died again. One daughter, a girl named Edwina (that one's his own fault, I'm sure). Saved Lincoln's son when he fell in front of a train. Embarrassed and horrified by the family black sheep.

I want to watch some of the movies about him, but I'm afraid it will only be utilized for the RP historical slash that now lives in my head:

The dark, intense, brooding President finds solace in the arms of the confident, charismatic young actor. The hothead younger brother discovers his much-admired sibling with a man whose political stance he despises, and the country is tossed into despair and chaos. Years later, the now-older actor reaches down to pluck a man out of the jaws of death, only to discover it was the only child of his long-lost love...

Sometimes, when work is crazy like it was today, I don't get a chance to go to the bathroom.

And so I have to come home and poop.


Also, for any of you that want to know, I have two perfectly round bug bites on my back where my tailbone ends and my ass begins.


I have tiny ass vampires. In my bed. Right now.

This is for all those who have seen the end of Season Whatever, Dr Who-style:
( Collapse )

Michael Charlton, whoever you are, I love you.

See, a bit of explanation is required at this point.

I sometimes read an online magazine called www.Slate.com.  And I know it's boring and probably one-sided and whatever, but I only read it for the movie reviews and Dear Prudence anyways (people are so fucked up and it's funny!) so I was trolling along and they had this contest:  which movie of the past five years would you remake now, with whom, and why?

And someone named Michael Charlton wrote in with this:

I would remake Troy with the Muppets, in the belief that Kermit the Frog and Miss Piggy would add more gravitas to the story as Achilles and Helen than the living actors did. I would use a nearly identical script but include Statler and Waldorf (the two grumpy old guys in the balcony) so that they could read from the Iliad and note where the script favors plot points lifted from Steve Reeves and Michael Bay movies instead of Homer. Unlike the original, Muppet Troy would also allow for kid-friendly merchandising, such as Baby's First Trojan Horse.


I love you, Michael Charlton.

Ok, so I tend to use curse words peppered in with normal dialogue like my life is a movie rated R and directed by Quentin Tarantino (on a day when Hollywood has run out of fake blood, ketchup, and all red food coloring) and this fact and the results directly occuring from it have been pointed out to me on more than one occasion.  Despite this, there are times in my life when I am simply required to use words like

Look, look my friends what Carl's Jr has given us: 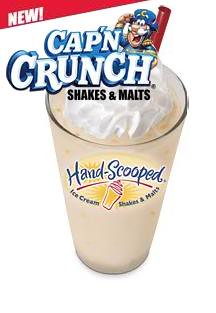 Take your least-favorite children's cereal, mix it with ice cream, and serve it with fries.

And in other news, America has truly bought into that "Hugh Laurie Speaks American" idea, haven't they?

Is it wrong of me to want to see a Keanu Reeves movie (that isn't the first Matrix) just to see Hugh Laurie as a hard-assed LAPD police captain?


I think the answer is yes.  But it is a delicious wrong.

Look at what I found, haphazardly scrolling around the web:

How is this not a cool thing???

It is a panda.

I have a demon! Stole this from

lit_gal : go here to get a random demon

This demon's name is: Tsarevich Seraglio

Sexually, your demon is: female

Your demon reproduces by: spawning hundreds, most of whom then eat each other

Your demon's moral orientation is: too old to care about morality

Your demon's body is: the shape of a water balloon.

But I can *really* tell your demon is not human when I see the: huge bug legs hidden under the cloak.

Their skin texture is: diseased.

Anyone who wants to attack your demon better go for: the hair.

A water balloon with bug legs?  I dunno....
Collapse